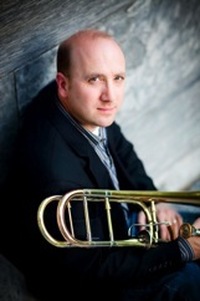 Matthew Vaughn has been a member of the Philadelphia Orchestra since 1999, and currently serves as Acting-Principal Trombone. Previous positions have included Principal Trombone of the San Antonio Symphony and service in the United States Air Force Concert Band in Washington, D.C. Mr. Vaughn has been offered principal trombone positions with the Los Angeles Philharmonic and the Atlanta Symphony, and has also performed with the National Symphony, Israeli Philharmonic, and the “Super-World” Orchestra in Tokyo, Japan. He is active as a soloist, having performed with the San Antonio Symphony, Lafayette Symphony, Richmond (Indiana) Symphony, Mainline Symphony, the United States Air Force Band, the University of Kentucky Symphony, and the Indiana University Symphony Orchestra and Wind Ensemble. He has given frequent solo recitals and masterclasses in the Philadelphia area and worldwide. Born in Dallas and raised in Richmond, Indiana, Mr. Vaughn earned a Bachelor of Music degree with high distinction and a Performer’s Certificate from Indiana University in 1992, continuing with graduate work in education and conducting at Indiana University and George Mason University. His varied musical background has included being the winner of the Eastern Trombone Workshop solo competition and being a member of the Disneyland All-American College Jazz Band, in addition to performance on stage with many of the world’s most famous conductors and soloists. An accomplished music educator, Mr. Vaughn teaches trombone and coaches brass chamber music at the Curtis Institute and Temple University, and is the founder of the Bar Harbor Brass Week, an intense summer festival for high school and college brass players. Mr. Vaughn credits most of his success to his former teachers, including David Brumfield in Richmond, M. Dee Stewart at Indiana University, former trombonist with the Philadelphia Orchestra, and the late Dr. Milton Stevens, former principal trombone of the National Symphony Orchestra.