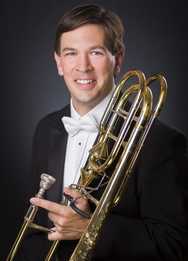 ​
George Curran became the bass trombonist of the New York Philharmonic in June 2013 after serving in that role with the Orchestra during the 2012-13 season. Previously, he was a member of the Atlanta Symphony Orchestra and was a fellow with the New World Symphony.
As a soloist, Mr. Curran recently premiered a new work written for him by David Gillingham called Vital Signs of Planet Earth with the Central Michigan University Wind Ensemble and has performed the piece several times since, including in Carnegie Hall. In 2014 and 2016, he was a soloist and judge at the Jeju International Wind Ensemble Festival in South Korea. Recently, Mr. Curran has participated in several recording projects starting with an Atlanta Trombone Project recording titled Roadwork. This project resulted in the formation of the Southeast Trombone Symposium, an annual week-long summer workshop at Columbus State University (CSU) where college students work with members of the New York Philharmonic and Atlanta Symphony Orchestra trombone sections. Additionally, Mr. Curran was a soloist on a recently released recording titled A Beautiful Noise, which featured prominent trombone soloists performing with the CSU Trombone Choir. He has also performed concertos with bands at the American Trombone Workshop and the Midwest Clinic in Chicago, and with many collegiate ensembles.
A native of Farmington Hills, Michigan, George Curran received his bachelor’s degree in music education on euphonium from Central Michigan University and a master’s degree in performance on bass trombone from the University of Cincinnati College-Conservatory of Music. His principal teachers have included John Rojak and Peter Norton. He is an S.E. Shires Trombone artist and is on the faculty of Rutgers University.