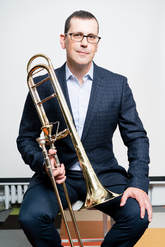 ﻿Trombonist Haim Avitsur, who joins the Hartt School as Associate Professor of Trombone beginning in fall of 2016, has premiered over 80 new pieces, encompassing a broad range of styles from solo trombone to chamber music and orchestra. Mr. Avitsur is also on the Classical Trombone faculty at Manhattan School of Music, NYC and an adjunct low brass faculty member at the Aaron Copland School of Music, Queens College, New York.. From 2008-2014 Mr. Avitsur was the trombone professor at West Chester University School of Music (PA). From 2004-2007 Haim Avitsur was on the faculty of the University of Virginia as well as the Principal Trombonist of the Charlottesville Symphony Orchestra. In 2005 he founded the Summer Trombone Workshop, which has a US residency at Temple University, PA. In the summers of 2007 and 2008, Summer Trombone Workshop had a second residency in Taiwan. Winter STW had its first residency in 2009 at Rowan University in New Jersey.
Dr. Justin Waller is an active musician and teacher across the United States. He has performed and recorded with such groups as the American Brass Quintet, the Hudson Valley Philharmonic, the Chattanooga Symphony and Opera, and numerous others. Recent solo performances include a guest recital at the Summer Trombone Workshop, hosted at the Manhattan School of Music, and a performance of the Concertino for trombone and string orchestra by Lars-Erik Larsson with the SCCC College Orchestra.
Justin was appointed to the position of Lecturer of Trombone at East Tennessee State University in 2018. Prior to becoming a member of this distinguished faculty, he served as an Adjunct Instructor of Music at Suffolk County Community College in Selden, NY, where he taught Applied Low Brass, Introduction to Music, History of Rock and Roll, and Basic Musicianship. In the summer of 2017, he joined the faculty of SEM Creative Arts, formerly known as the Performing Arts Institute, at Wyoming Seminary in Kingston, PA. He has also taught multiple courses at Stony Brook University and has served as the low brass instructor for the Columbus State University Schwob School of Music Preparatory Division.
Justin earned the Doctor of Musical Arts and Master of Music degrees from Stony Brook University in Stony Brook, NY, and graduated with the Bachelor of Music degree from Columbus State University in Columbus, GA. 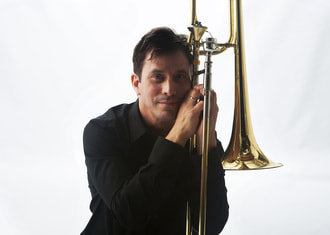 ​Nitzan Haroz, a native of Israel, rejoins The Philadelphia Orchestra as Principal Trombone in 2014 after holding the same position with the Los Angeles Philharmonic since 2012. Previously he was Principal Trombone of The Philadelphia Orchestra since 1995 after serving as Assistant Principal Trombone of the New York Philharmonic and as Principal Trombone of the Israel Symphony and Opera Orchestra. He was also first trombone of the Israel Defense Forces Orchestra and performed with the Jerusalem Symphony Orchestra. Haroz has appeared as a soloist with the Philadelphia Orchestra (which included his Carnegie Hall solo debut, where he world-premiered Blue Winter for trombone and orchestra by Roland Pöntinen), the Israel Philharmonic Orchestra, Israel Symphony Orchestra, the Jerusalem Symphony, Sofia Radio Symphony, and the Fairbanks Symphony, among others, and is an active recitalist and chamber musician. He is a first prize winner of the François ShapiraCompetition in Israel and a former scholarship recipient of the America-Israel Cultural Foundation. He has commissioned and premiered several works for trombone and harp with his mother, harpist Adina Haroz. Haroz is a frequent clinician at trombone conferences world-wide and has given master classes and recitals in Israel, the U.S., Europe, and Asia. Haroz has performed with the New York, Philadelphia, and Israel brass ensembles, the Rishon-Le Zion Brass Quintet, and many other chamber groups. His teachers included Eli Aharoni, Mitchel Ross in Israel, and Joseph Alessi at the Juilliard School. His recording Towards the Light was released in 2004. Haroz serves on the faculty at the Curtis Institute of Music and Temple University in Philadelphia.
​ 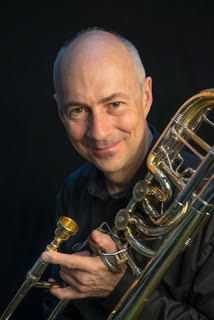 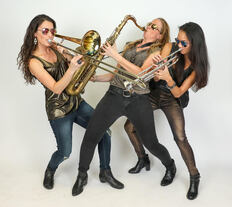 Sarah Hatler and the Wonder Horns

Wonder Horns (Alisha Pattillo, sax; Amanda Bateman, trumpet; Sarah Hatler, trombone) began playing together as the horn section for the Walton Stout Band, a Top 40 cover band out of Dallas, in 2016. Right from the start, their chemistry on stage garnered attention and high fives from audience members, whether it be at a wedding, a corporate event, or public club gigs. Their high-energy playing and fun choreography has kept them in-demand with many different bands throughout Texas, and the Wonder Horns look forward to keeping the music funky and fresh in the future.


Sarah Hatler is a versatile trombonist based out of Dallas, Texas. In addition to maintaining a low brass studio at the renowned Booker T. Washington High School for Visual and Performing Arts, she can be heard playing throughout the country with various Top 40 bands. Trained as a classical musician, she has performed with the Washington Concert Opera, Pan American Symphony Orchestra, the Chelsea Symphony, Flagstaff Symphony Orchestra, and as part of the Dallas Symphony Orchestra’s SOLUNA Festival. She was assistant principal trombone of the Amazonas Filarmonica in Manaus, Brazil, from 2009-2011 and taught at the local music conservatory while living there.